For today's guest post, I am welcoming the gals from KREATIV77.  Both Alix and Chelsea post on their amazingly creative blog, with everything from recipes to creative DIYs and family life.  Check them out!

Today's recipe is a Turkey Pot Pie KNOW how much I love pot pie!  Remember the Chicken Pot Hand Pies I made?  Well, this recipe from Chelsea is so good that it converted her from on-the-fence to a pot pie lover.  Besides, it just looks so darn good.  Let's get to it!


I'm not a huge fan of pot pie.  In fact, it would be pretty safe to say I dislike it immensely.  Maybe because the pot pies I've had in the past, either homemade or store bought, seem to be made up of crust, gravy and a few pieces of chicken and veggies....which always seem to be the same size.  They've mostly been gray in color and almost no taste to them. There's something not right about that to me. So I just don't eat it.

However, I have found the most delicious pot pie ever made in the entire world.  No joke. 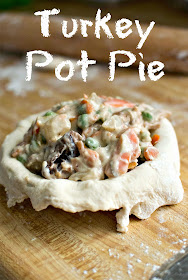 My friend Emily (who is a super good cook and my favorite person ever, she's one of the coolest people I know) whipped up this recipe with whatever sounded good to her.  No exact measurements- the vegetables aren't uniformly cut and it has the perfect amount of "gravy" to hold it all together without being so overwhelming.  And it has turkey instead of chicken which I believe makes all the difference.

I call it the Preferred Pot Pie...but Emily and I came up with several names: Lousiana Pot Pie, Turkey Mushroom Pot Pie, Stuff Your Face Full of Heaven Pot Pie....etc.

It's pretty easy to make too: 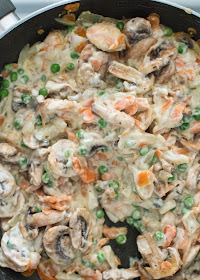 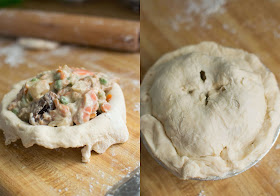 And because these weren't exact measurements, I had some turkey and veggie mixture left over to make a small personal pie.  I told you I'm afraid of making homemade pie crust...and I am....so I called my mom and had her make me some pie crust.  I'm a baby, I know. I don't know why it's so scary to me.  I'm just afraid of messing it up, and in all honesty, I think it just takes too much work and I'm lazy.

Anyway.  There you have it.  Heaven's Pot Pie.  I'm taking some to work tomorrow for lunch.  I've never been so excited to bring my lunch to work!

I love to hear your comments! And putting in your two cents is always free. :)